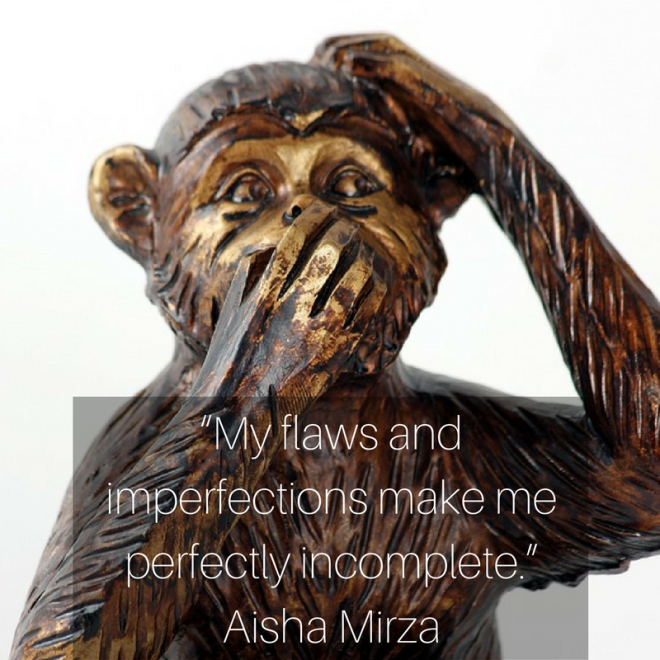 Contrary to popular belief: I am not perfect. I have plenty of things that make my normally sunny disposition at times a little less than rosy. Now, if you clicked on this hoping for a manifesto on what makes me terrible: shame on you. If you clicked on this looking for a discussion on the nature of flaws, agency and expertise: then I humbly welcome you and let’s get started.

So as many of you know, I panel. I love being a panelist and I love being able to show that I am an expert in my field and that I adore sharing my knowledge with other people during a panel performance. Now, my panels are sometimes a bit odd. I really get to cut loose when I’m on stage and really have fun. I have a big personality despite my small frame and a voice that doesn’t match the petite princess many assume I am. But in cutting loose, I worry very little about what I have to say. I use slang, expletives, chatspeak and whatever word that comes out of my mouth to best explain my thought at the time. Truthfully, if you’ve even seen me perform the same panel twice: each performance is a little different.

During last A-Kon, on top of the fantastic review that I received I also did get a not so positive one. A viewer was more than put off my by use of casual language and the occasional bad word (oops). The reviewer comments that it “took him entirely” out of the panel that I used common vernacular and even gasp profanity. Now, before you start thinking:

Amanda, are you just mad because SOMEONE didn’t like one of your shows?

Well, yes. But more than that. I was very struck by the choice of words. Took him out of the show because of my use of common speech. And it got me thinking. How am I supposed to speak? What would have satisfied him? What was he expecting? And really, does common language make an artist no longer an artist?

Shakespeare was considered to be lowbrow during his time because of his use of common language. Poe never received a great deal of critical acclaim because of his use of terrifying imagery and rather plain language. And many authors, poets and creators have been put to the side for their use of the language of the common folk. And why is that? Because it makes art attainable. Art and writing has always been a tool to keep those in power in power and those below in the muck and mire of mediocrity. So when revolutionary people took art into their own hands (Oh, you know. Like publishing the Bible in German not Latin) they are often demonized because now EVERYONE could understand and reach and react to the piece.

I’m a writer. I have been paid for my work. I hold a degree from a top-tier school. I’ve paneled before and my use of language that is common to myself and those around me should not be the thing that absolutely invalidates my ethos. And if it does: again, what did you expect? For me to saunter out onto the stage in full arsenic-filled makeup, corsetted to the gods and speakin’ the King’s?

Now, I’ll take the hit. I should reign in my mouth. I can stand to, at least a little bit. It isn’t ladylike to be profane but the double standard of a woman who uses profanity and a man that uses profanity is a topic for, well, another time. This whole audit of panels and panel videos (that don’t go up for a reason you’ll find out soon) in prep for a new round of panel creation and applications. I do swear, probably more than I should. And I was very taken aback by my own loose nature with language upon listening to my videos, and truthfully, a little ashamed. I’m disappointed that I get so comfortable with my audience that I do not always try to impress them by finding a different word to use than “damn”. But that doesn’t stop me from putting on a good show and it doesn’t seem to bother any of the other literal hundreds of people that have seen me perform.

And I’ve struggled with that in other places as well. The chatroom I moderate for has a very strict no chatspeak policy and despite how I feel about the rule, I do think it’s an odd paradox. Sure, I’m a writer and sure, I can use more elaborate constructs of language but sometimes there’s no better response to something that LOL. We’ve added those things to our language. They are our cultural artifacts that I’m sure will be judged by future humans and future civilizations. But hey, remember that time that people actively shunned television because they assumed they’d ruin books? Also remember the time that people actively shunned books but they didn’t want humans imagining things that weren’t real and happening before them?

So let’s just remember that an expert by any other word is an expert. And really, if my occasional swear word and use of shorthand is the most egregious thing you’ve witnessed me do or say; then I guess I’m doing a hell of a good job.